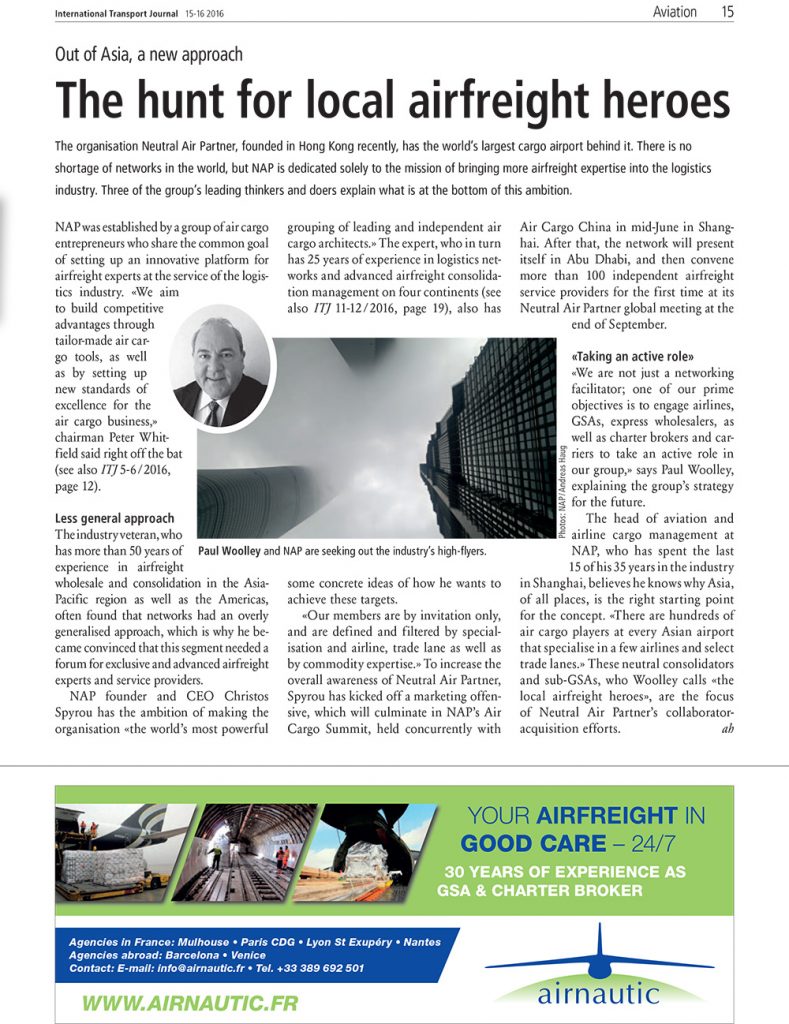 The organisation Neutral Air Partner, founded in Hong Kong recently, has the world’s largest cargo airport behind it. There is no ­shortage of networks in the world, but NAP is dedicated solely to the mission of bringing more airfreight expertise into the logistics industry. Three of the group’s leading thinkers and doers explain what is at the bottom of this ambition.

NAP was established by a group of air cargo entrepreneurs who share the common goal of setting up an innovative platform for airfreight experts at the service of the logistics industry. «We aim to build competitive advantages through tailor-­made air cargo tools, as well as by setting up new standards of excellence for the air cargo business,» chairman Peter Whitfield said right off the bat (see also ITJ 5-6?/?2016, page 12).

The industry veteran, who has more than 50 years of experience in airfreight wholesale and consolidation in the Asia-Pacific region as well as the Americas, often found that networks had an overly generalized approach, which is why he became convinced that this segment needed a forum for exclusive and advanced airfreight experts and service providers.

NAP founder and CEO Christos ­Spyrou has the ambition of making the organisation «the world’s most powerful grouping of leading and independent air cargo architects.» The expert, who in turn has 25 years of experience in logistics networks and advanced airfreight consolidation management on four continents (see also ITJ 11-12?/?2016, page 19), also has some concrete ideas of how he wants to achieve these targets.

«Our members are by invitation only, and are defined and filtered by specialization and airline, trade lane as well as by commodity expertise.» To increase the overall awareness of Neutral Air Partner, Spyrou has kicked off a marketing offensive, which will culminate in NAP’s Air Cargo Summit, held concurrently with Air Cargo China in mid-June in Shanghai. After that, the network will present itself in Abu Dhabi, and then convene more than 100 independent airfreight service providers for the first time at its Neutral Air Partner global meeting at the end of September.

«We are not just a networking facilitator; one of our prime objectives is to engage airlines, GSAs, express wholesalers, as well as charter brokers and carriers to take an active role in our group,» says Paul Woolley, explaining the group’s strategy for the future.

The head of aviation and airline cargo management at NAP, who has spent the last 15 of his 35 years in the industry in Shanghai, believes he knows why Asia, of all places, is the right ­starting point for the concept. «There are ­hundreds of air cargo players at every Asian airport that specialize in a few airlines and select trade lanes.» These neutral consolidators and sub-GSAs, who Woolley calls «the local airfreight heroes», are the focus of Neutral Air Partner’s collaborator-­acquisition efforts.